'I would do anything for Cherie. Lauren? I don't even love her': Tony Booth reveals the diverse emotions he feels for two of his daughters

One of his daughters was this week revealed to be an eBay addict. The other announced her conversion to Islam. So what does their father have to say about them...

The actor Tony Booth had a stroke a few weeks ago, so his children had to be informed. Given that he has eight daughters from a giddying array of relationships, it’s a wonder his current wife Steph managed to get hold of everyone.
But as he lay in hospital — ‘driving the nurses mad’ — it seems that she did.
First to get the call was his eldest daughter, Cherie Blair, who calls Steph her ‘wicked stepmother’, albeit with tongue firmly in cheek. Cherie was distraught and offered to visit immediately. Lauren Booth's recent conversion to Islam has been criticised by her father as a 'mischief-making career move'
Somewhere way down the list was Cherie’s half-sister Lauren Booth, who was told via email. She passed on her best wishes and asked to be kept informed.
Presumably, she at least called to speak to her father directly once he was out of hospital and recuperating?
‘Absolutely not,’ says Tony, most famous for his role in the BBC’s Till Death Us Do Part.
‘And I wouldn’t have expected her to either. I don’t know if we’ll ever speak again. I suspect not.’
Both of these daughters — the one Tony says he would ‘go to the ends of the earth for’ and the one he professes never to want to see again — have been in the news this week due to varying degrees of, erm, eccentricity.
Cherie, high-flying barrister and wife of the former prime minister, was revealed as an eBay addict, buying Disney videos at bargain prices and flogging her husband’s signature for a tenner, despite the fact that the pair of them are worth a reported £60 million. 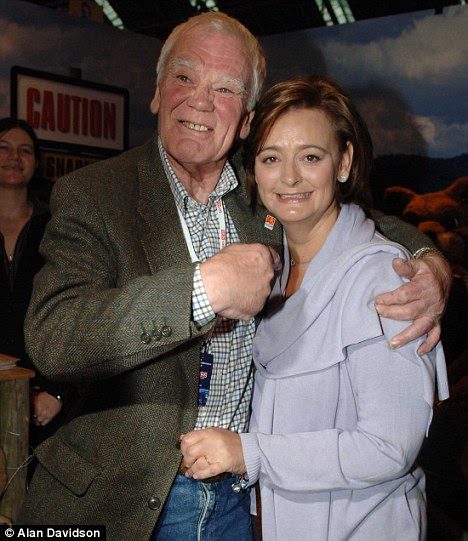 Daddy's girl: Tony Booth is thrilled with Cherie's success and will always defend her 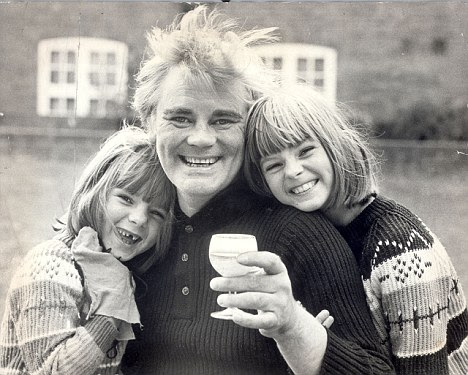 That was then...: Lauren, pictured here on the right with her father and sister Emma, claims her childhood was characterised by violence and neglect
Lauren, meanwhile, was pictured in a hijab, telling the world how her curious life journey — which has included stints on I’m A Celebrity . . . Get Me Out Of Here! and breaking through the Israeli naval blockade of Gaza on a ‘peace’ flotilla — has caused her to embrace Islam.
She has stopped eating pork, she told the world, hasn’t had a drink in 45 days and has reached page 60 of the Koran.
There is nothing wrong with religious conversions — or using eBay, for that matter. But stir them into the colourful Blair/Booth family mix and you are left with a bizarre soap opera.
One commentator went so far as to call this family the ‘new Osbournes’. The parallels are certainly striking. I have interviewed Ozzy and Sharon and emerged dazed from both encounters.
The feeling is similar after two hours in the company of Tony Booth. As an interviewee, he is delightfully indiscreet. But listening to his track record as a father, you quickly conclude you wouldn’t give him a budgie to rear, let alone eight daughters. 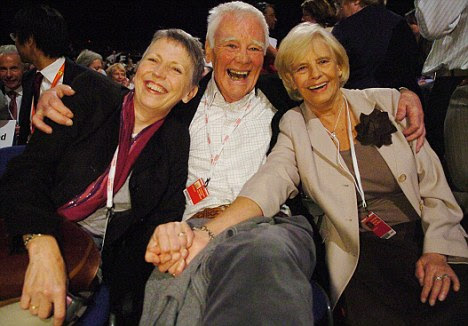 Party animal: Tony has been a lifelong supporter of the Labour Party. He is pictured here at the party's 2006 conference with his current wife Steph (left) and former wife Gale Howard - the mother of Cherie
Five minutes into our interview, he has confessed that the last time there were more than two of his daughters in the same room — ‘which I try to avoid because they tend to rip me to pieces’ — he didn’t recognise one of them.
‘Poor, um, was it Jenia?’ he asks his long-suffering wife, who seems to know more about his daughters than he does.
‘I hadn’t seen her for five years. I started talking to this perfectly nice girl. After a while she smiled and said to Steph: “Dad doesn’t recognise me, does he.” ’
Steph rolls her eyes. ‘It was mortifying, but yes, he’s a terrible father. It’s awful, but rather typical, I’m afraid. I’m the one who has to keep tabs on birthdays and names. But he is very fond of them all, in his own way.’
Well, not all of them, patently. We shall get on to his golden girl — Cherie — and her eBay obsession in time, but first we talk about Lauren.
Confusingly, as if there aren’t enough female names in the mix, what with eight daughters and four ex-wives, he calls Lauren Sarah, the birth name she later changed.
He scoffs continually as we talk about Lauren/Sarah. His reaction on hearing about her conversion was to ‘laugh my head off’ and ask: ‘Whatever next?’
‘I mean, come on, the girl doesn’t have a spiritual bone in her body,’ he says.
‘Anyway, can you convert from Judaism to Islam?
‘The things is her mother was Jewish. Sarah wasn’t brought up a practicising Jew, but it goes down the female line, doesn’t it?’
He points out that Lauren hates her mother Pamela Smith, a model, ‘almost as much as she hates me. So maybe that’s what this is all about’. 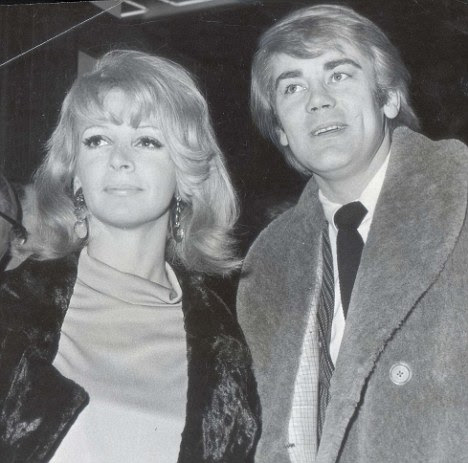 Glamorous couple: Tony had a relationship with model Susie Riley after his first marriage broke up. The result was two more daughters, Lauren and Emma
The Booth family tree is so complicated that Tony had to start his autobiography with a diagram. The fact that many of the women he was involved with were actresses and models — going by both birth and stage names — further baffles.
To summarise, Cherie’s mother was Gale Howard (nee Joyce Smith), an actress. Booth walked out on that marriage when Cherie was seven and her sister Lyndsey was five.
He took up with Pamela Smith — whose modelling name was Susie Riley. They never married, though they had two daughters, Lauren and Emma.
Two further marriages followed — to the actress Pat Phoenix in 1986 and Nancy Jaeger in 1988. He has been with Steph Buckley, a former teacher and Labour Party activist, for 14 years.
‘All his daughters have told him I’m the last or they will kill him,’ she says.
Of all his family, it’s Lauren who inspires the most exasperation. Tony admits he has watched with mounting horror this particular daughter’s very public journey though life.
She first came to attention as a journalist — her favourite subject was her brother-in-law, who happened to be the prime minister.
Her fame, believes her father, was a direct result of her willingness to exploit her family connections. Now, with a lifestyle choice he thinks is ‘more about politics than religion’, he thinks she has overstepped the mark.
‘If I thought she genuinely believed in Islam, it would be a different matter. But I’m afraid I don’t,’ he says.
‘I honestly don’t know what her motivation is. Maybe it’s mischief-making. Maybe a career move. Is she after a job with Al Jazeera, the Arabic news network? I don’t know, but it’s madness.
‘She described this conversion as a “shot of spiritual morphine”. That’s an odd analogy.
‘Morphine is terrible stuff. I should know. I was on it for long enough after I fell into a vat of paraffin in 1979. It’s not something you should seek out.’
The paraffin story is typically Tony Booth. In short, he nearly burned to death when, during a drunken attempt to get into his locked flat, he fell into a lit drum of paraffin.
Tony and Lauren haven’t spoken for some years, after he lashed out at her for ‘the things she said about Cherie and Tony, which were unforgivable’.

A MAN of CONVICTION